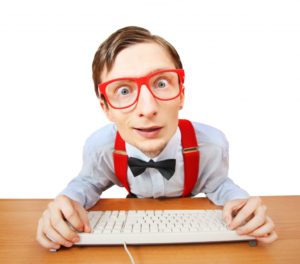 “An unfashionable or socially inept person” Yep, it’s an understatement to say that the official definition of the word “Geek” as you will find it in the dictionary is far from flattering. But thanks to the rising popularity of geek entrepreneurs (and tech billionaires) such as Bill Gates and Mark Zuckerberg the word has many positive connotations in today’s society. The modern day definition of the word Geek is nicely summed up by the Urban Dictionary as “The people you pick on in high school and wind up working for as an adult”.

Because of the rising popularity of the geek persona company names ending or starting with the word Geek have become more and more popular and quite a few of these startups have evolved in established companies with strong brand recognition and large client bases. Due to the popularity of the word geek within tech companies and startups, it can also be relatively easy to market and brand a company, for instance, a new startup could find niche edits services in order to optimize their business website more towards search terms like geek, or with geek included. No matter what service they’d be offering, they’d be sure to use various marketing techniques efficiently due to the popularity of such a brandable keyword like “geek”.

All of the above companies own the matching .com domain name for their brand. Although most sales in this category have remained private and unreported there are still plenty of public sales figures for domain names including the Geek keyword. Some of the largest ones include:

Do you own or have you sold any Geek domain names? Let us know in the comments.

Some great brandables coming up for auction at NameJet this week include:

7 thoughts on “Behind the Brandable Keyword: Geek”

Sign-up to get our weekly brandable auction picks + news

It's free to subscribe and we'll never spam you :)